World famous because of a misconception 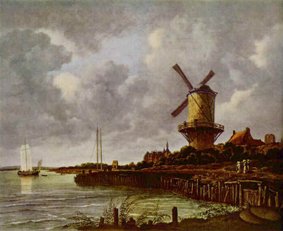 The windmill was under threat of destruction during the 1920s and a committee was founded to save the windmill from its demise. In part because of the big misconception that this was Ruisdael’s famous windmill, a lot of money was raised. But it did the trick! On 28 November 1929, the ownership of windmill Rijn en Lek was transferred to The Dutch Mill Society (Vereniging de Hollandsche Molen) in Amsterdam.

For that reason, we can now enjoy its history, its beautiful wooden sweeps, and the stunning view of the rivers Rhine and Lek when standing on the gallery.

The windmill is in regular use, when flour is ground by four voluntary millers: Camiel Damen, Henk Geerts, Gerben Terpstra and Louis Maas.